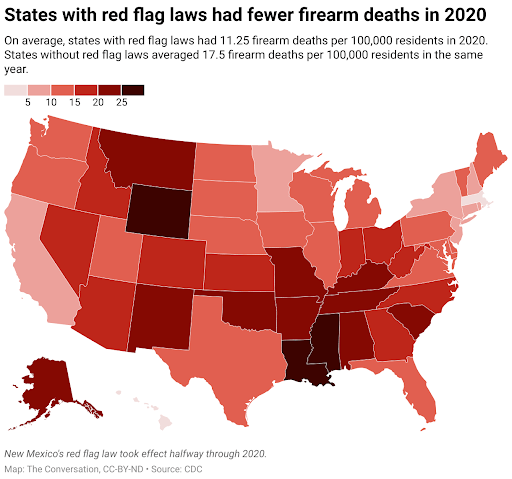 By John A. Tures

Lawmakers in Congress are poised to pass the first gun control legislation in three decades. Among the elements in that legislation is support for states to pass what are called “red flag laws.”

These laws, already in place in many states, let police take guns from people deemed a threat to themselves or others. The laws also seek to bar those people from buying guns.

The proposal has emerged again in the wake of the mass school shooting in Uvalde, Texas, as well as others in recent weeks. The current draft of a Senate bill would make $750 million in federal funding available to help states administer a red flag law if they have or pass one – though states without them could also qualify for the money by adopting other policies unrelated to guns.

The contrast between states that have them and states that don’t provides a useful opportunity for a scholar like me, who uses data to help understand politics, to examine whether they may help reduce gun-related deaths.

Since Connecticut became the first in 1999, states across the country have enacted laws allowing police to seize guns from people a court agrees are dangerous – and often barring them from buying guns as well.

The nation’s first red flag law was passed in Connecticut in 1999, allowing police – but not medical professionals or family members –to ask a judge for permission to seize the guns of a person believed to be imminently dangerous to themselves or others. In the subsequent two decades, a handful of other states passed similar laws.

In 2018, the mass shooting at Marjory Stoneman Douglas High School in Parkland, Florida, sparked a new crop of them. That year, Florida passed a red flag law, and many other states followed suit. By the end of 2021, 19 states and the District of Columbia had done so. Not every state is on board: In 2020, Oklahoma banned its counties and municipalities from passing red-flag laws.

While differing slightly from state to state where they do exist, these laws generally allow a judge to declare a person legally ineligible to own or purchase guns for a maximum of one year. The request has to come from the police or, in some states, a doctor or relative. The person can usually challenge the ruling in court, and police can seek extensions of the decision, which is often called a “risk protection order,” if they deem it appropriate.

In Florida, where the request must come from police, an average of five of these orders are granted every day.

Do they reduce gun deaths?

Research has shown that Connecticut’s red flag law reduced suicides, which involve firearms more than half the time.

To determine if red flag laws reduce gun deaths overall, I examined states’ firearm death rates, in light of whether they had a red flag law or not, in each of three years – 2018, 2019 and 2020.

Then I imagined those average firearm death rates applied to the whole country – if the whole nation had a red flag law, or there were none at all. In 2020, if there were no red flag laws, I estimate that 52,530 Americans would have died in gun deaths. The number actually recorded was 45,222, indicating red flag laws saved 7,308 American lives that year.

If red flag laws had existed either state by state or at the federal level, my estimate is that 33,780 people would have died by firearms in 2020 – saving an additional 11,442 lives. (The CONVERSATION)