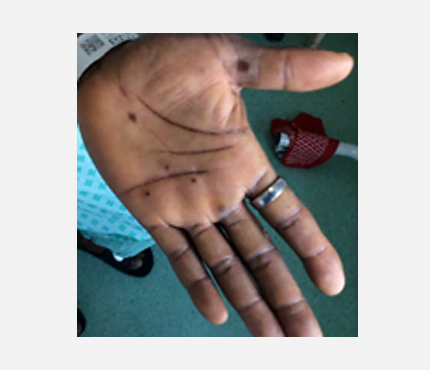 “We have been anticipating and preparing for Monkeypox to reach our community,” Dr. Stephen Miller, Hamilton County Health Department health officer, said in a statement.

“Overall, the risk to our population is low, but be mindful that Monkeypox is a disease that can affect any individual. The Health Department is currently conducting case investigations to alert close contacts who might have been exposed to the virus while the patients were infectious.”Monkeypox was first identified in humans in 1970 in the Democratic Republic of the Congo in a 9-month-old boy. Since then, most cases have been reported from rural, rainforest regions of the Congo Basin, particularly in the Democratic Republic of the Congo and human cases have increasingly been reported from across central and west Africa.

Monkeypox was first detected in the United States in a Massachusetts man in mid-May, and has since spread to nearly every state in the country. According to the U.S. Centers for Disease Control and Prevention, c

that monkeypox isn’t something most Chattanooga residents should be worried about.

“The risk to the general public is low,” Young said in an email. “Monkeypox can spread through direct physical contact from a person with monkeypox or by touching objects, fabrics, and surfaces used by someone with monkeypox. It can also spread through contact with respiratory secretions. If you have a new rash or are concerned about monkeypox, contact your healthcare provider.”

Monkeypox is in the same family of viruses as small pox, although its side effects aren’t as severe. No Americans have died so far from the virus that can include chills, exhaustion, fever, headache, muscle aches and swollen lymph nodes. Monkeypox often also comes with a rash that can look like pimples or blisters, according to the Centers for Disease Control and Prevention (CDC).

The current outbreak of monkeypox in the United States, Europe and other countries that don’t traditionally experience the virus, is predominantly occurring in gay or bisexual people, or men who have sex with men, according to public health officials.

New York, Florida and Georgia top the list of the states with the most cases.

The Tennessee Department of Health  distributed 2,101 doses of monkeypox vaccine late last month. Young recommends that people interested in getting a vaccine call the Hamilton County Health Department hotline at 423-209-8383, if they think they have been exposed to someone who has monkeypox and are seeking vaccination.