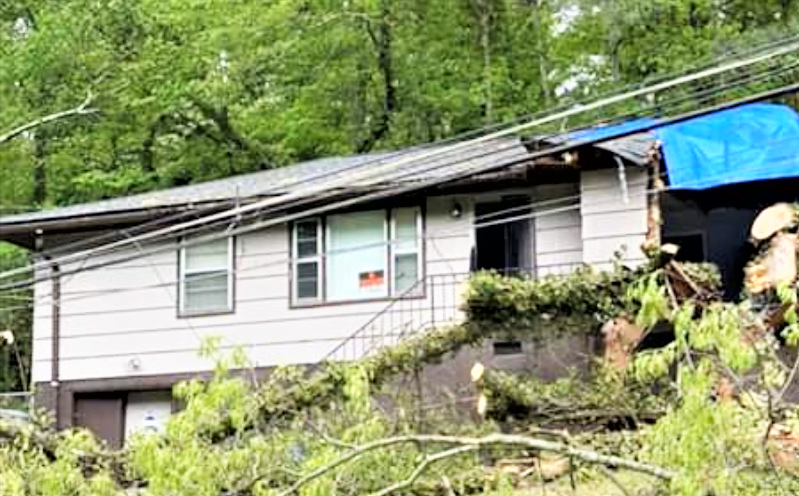 Musical artist Raffell Jenkins, 29, was the first confirmed victim in Hamilton County from a tornado which left a path of death and destruction in its wake on Easter Sunday.

As the nearly 100 mph winds of the deadly tornado tore across Chattanooga late Sunday night and into early Monday morning, Jenkins–also known as Ralf Jay–was crushed in his sleep by a tree that fell on the corner bedroom in his Wilcox Boulevard home.

Jenkins died in bed next to his fiancee Jasmine Fuller, as four kids were sleeping in the next room. Fuller was missed by the tree and managed to crawl out from under ceiling debris with minor injuries, according to family members.

Fuller and Jenkins had been together for five years and had a three-year-old daughter together.

In a Facebook post, Fuller’s sister, Kendra Miles, said, “The tree came from the roots and fell on her and her bd (baby’s daddy) Raff! They said my sister was lucky to be alive! Unfortunately Raff didn’t survive! The tree was 4-6 ft. long! Prayers to Raff’s family & my sister as well as their kids! Thank God they are still alive! Prayers for all the Tornado victims in Chattanooga, Tn.”

A spokesperson with the National Weather Service said at least one 9-mile-long and 1,500-yard-wide tornado, an EF-3 with speeds reaching 145 mph, touched down in Chattanooga–leading to downed trees, damaged roads and bridges, shattered glass, ripped apart buildings and widespread power outages.

“We just all came and tried to do what we could do to get him out, but we couldn’t do nothing,” said Jenkins’ aunt, Flossi Parrish.

Parrish told reporters it took nearly two hours for the Chattanooga Fire Department to respond, and that Jenkins’ body lay in his bed under the tree for six hours before a landlord called for a contractor to cut the tree.

During the thunderstorms, hail and high winds that ripped through the city, Hamilton County Emergency Management Service responders transported at least 21 patients to local hospitals, and at least 150 buildings sustained damage.

Two people died in Hamilton County and one person died in Marion County.

A deadly tornado on top of a global coronavirus pandemic is unthinkable, but now hundreds in the Scenic City are having to handle both, and start over.

“In the toughest of times, we see the best in our people,” said Chattanooga Mayor Andy Berke. “We have seen that time and again in our city as we’ve faced incredible challenges. We’re seeing it today as we rebuild from last night ‘s tornadoes.”

During the devastating storm and flooding–which hit hardest in the East Brainerd area–at least 60,000  Electric Power Board of Chattanooga customers lost power, the company reported. At press time, EPB has returned power to about 22,000 customers. Full power restoration is estimated to take up to 7-10 days.