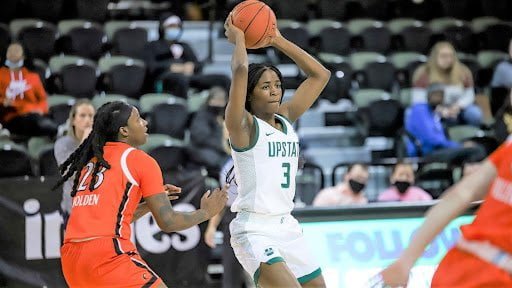 Davis, a transfer from USC Upstate, will have three years of eligibility remaining. The 6-2 post player played in 21 games for the Spartans and averaged 7.4 minutes per game and shot 58.7 percent from the field.

The Calhoun, Ga., native recorded a career-high 11 points on 4-of-7 shooting against Columbia International and added a career-best eight rebounds in the contest. Against Bob Jones she was 4-of-4 from the field and posted her second double-digit game with 10 points while playing a career-high 21 minutes.

Davis helped USC Upstate to a 22-8 overall record in her freshman campaign and a third place finish in the Big South with a 14-4 record in conference play.

In her senior season at Calhoun County, Davis helped the Cougars to the 2021 Georgia Class A state title. She is a four-time Defensive Player of the Year, a three-time Best Shot Blocker and Best Rebounder. Davis is a two-time all-state selection and was named back-to-back Region 1-A Player of the Year. She averaged nine points, 18 rebounds and 13 blocked shots per game.

Davis is the daughter of Takela Davis and, along with her twin Takiah, is the oldest of five children.

She joins Brooklyn Crouch and Yazz Wazeerud-Din as this year’s signees.