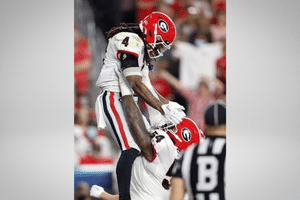 New Year’s Eve, Friday, December 31, the Georgia Bulldogs made their second ever appearance in the college football playoffs. And, as a no.3seed, the Bulldogs defeated no. 2 seed, Michigan 34-11. in the Capital One Orange Bowl. In route to the wolverines, Georgia became the first team to score on its first 5 drives in a College Football Playoff game.

The game MVPs were Georgia seniors quarterback Stetson Bennett, who completed 21of 31 passes for 307 yards and three touchdowns, while rushing three times for 32 yards, and cornerback Derion Kendrick, who recorded two interceptions and five tackles. UGA’s first time in the CFP was in 2017, when as the 2017 SEC Champions and a No. 3 seed, they outlasted No. 2 seed Oklahoma to get a 54-48 double overtime Rose Bowl Game Victory, before falling 26-23 in overtime to No. 4 seed Alabama, in the National Championship Game.

Georgia will now play Alabama again for the National championship. And this game is slated to air at 8:00 PM ET Monday, January 10 on ESPN. It will be the second time Georgia has played in the CFP, National Championship Game, without winning Its conference Championship game.