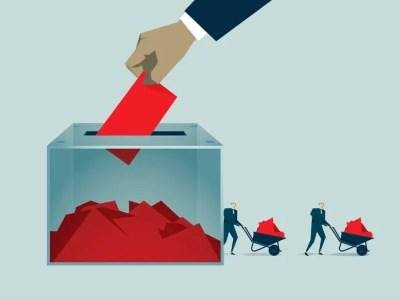 National—State lawmakers have been continuing to push legislation that makes it harder to vote, with 2 new restrictive voting laws enacted so far this year (as of May 4).

Election interference legislation — bills that could lead to tampering with how elections are run and how results are determined — have moved more quickly, with 9 new laws enacted in 2022 (as of May 4).

(At this point, more than half of all state legislatures have ended their 2022 legislative sessions. Also, legislatures are in the second year of their two-year sessions, when they generally tend to pass fewer laws than in the first year. This year follows that trend.)

With 4 of the 9 laws, Georgia leads the country in new election interference laws so far this year.

3 of Georgia’s new laws create the risk of partisan interference with election procedures and results.

Florida and Georgia each have a new law creating entities dedicated to pursuing election crimes. This legislation is fueled by the false pretense of voter fraud.

Alabama, Arizona, Kentucky, and Oklahoma each have a new law establishing new criminal penalties for elections officials for actions to expand voter access or for minor mistakes during their ordinary course of conduct.

At least 17 election interference bills introduced in 2022 are moving through 5 state legislatures as of May 4.

Arizona leads the nation in the number of election interference bills that have been introduced in 2022 (27), including 4 bills moving in the legislature that would transfer authority over specific aspects of election administration in ways that could open the door to political interference.

Overall, lawmakers in 27 states have introduced at least 148 election interference bills so far in the 2022 legislative session.

Between January 1 and May 4, 2022, Arizona and Mississippi each enacted a law that restricts access to the vote by requiring documentary proof of citizenship for voter registration. (The laws were enacted despite the U.S. Election Assistance Commission’s decision that documentary proof of citizenship requirements are not necessary to determine a voter’s eligibility.)

Of the 2 laws, only Mississippi’s will be in effect for the midterms. Additionally, a restrictive voter ID ballot initiative in Arizona will be on the general ballot for voters.

At least 34 bills with restrictive provisions are moving in 11 state legislatures as of May 4. Of these bills, almost three-fourths — 25 bills in 10 states — would curtail access to mail voting.

In all, lawmakers in 39 states have introduced at least 393 restrictive bills so far in the 2022 legislative session.

Between January 1 and May 4, 2022, 4 states — Arizona, Connecticut, New York, and Oregon — have enacted 5 laws that expand access to the vote. One of Arizona’s two expansive laws and the Connecticut and New York laws will be in effect for the midterms.