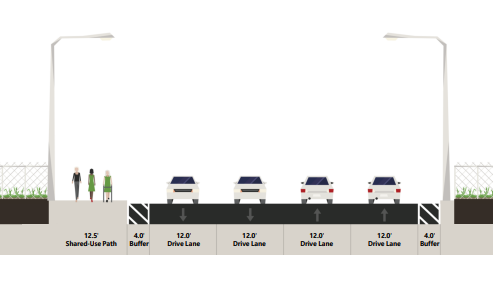 Chattanooga, Tenn. (August 12, 2022) — The City of Chattanooga will receive $25 million in federal funds to replace the 70-year-old, long-deteriorating Wilcox Boulevard Bridge with a new, modern structure that will better connect residents to the Tennessee River while enhancing a core logistics corridor for the city.

The funding, which was granted by the U.S. Department of Transportation’s Rebuilding American Infrastructure with Sustainability & Equity (RAISE) program, represents one of the largest, single-item transportation investments in the City’s history.

“On behalf of the City of Chattanooga, I sincerely thank President Biden and Transportation Secretary Pete Buttigieg for this historic investment into our city, which will uplift our transportation industry and ensure a more connected, healthy, and equitable future for our residents,” said Mayor Tim Kelly. “I also want to thank our congressional delegation, Governor Bill Lee, the Tennessee Department of Transportation, Norfolk Southern, our state delegation, Mayor Jim Coppinger, our City Council and County Commission, and the many others who made this project possible. This unprecedented series of partnerships is the perfect example of the tremendous impact we can have when we work together on transformative solutions that will improve people’s lives for decades to come.”

The existing bridge has deteriorated to the extent that it can only support passenger vehicles, delaying East Chattanooga response times for first responders, and increasing the burden on the city’s local logistics and transportation industry. When completed, the new bridge will expand equitable access to jobs, parks, trails, and essential services for some of the city’s most historically disadvantaged communities, while increasing safe access to one of the region’s most important logistical assets — Norfolk Southern’s DeButts Railyard.

“We’re pleased to congratulate the City of Chattanooga for being awarded a federal Rebuilding American Infrastructure with Sustainability & Equity (RAISE) grant to replace and improve the Wilcox Boulevard Bridge in Chattanooga” said Deputy Governor and Tennessee Department of Transportation Commissioner Butch Eley. “This bridge replacement will strengthen Chattanooga’s infrastructure network and provide a safer, more reliable route for members of the community. TDOT has a long, demonstrated history of working with the City and we look forward to continuing our partnership to ensure this project is successful.”

The new bridge will be engineered to modern structural integrity standards that will support CARTA buses, emergency vehicles, increased vehicular traffic, and multimodal freight to support future economic activity in East Chattanooga. It will also include a new multi-use path that will directly connect East Chattanooga residents to the Riverwalk through the Wilcox Boulevard Connector — a pedestrian and bike connection the City plans to develop from Amnicola Highway at Wilcox Boulevard to the Riverwalk in the coming years.

“Norfolk Southern joins Chattanooga in celebrating the RAISE Grant award for the replacement of the Wilcox Boulevard Bridge,” said Ed Boyle, Vice President of Engineering for Norfolk Southern. “Communities are connected by infrastructure: goods move, people connect, and growth happens. We’re proud to be a part of the Chattanooga community and to be a part of this important project.”

With a direct connection to the Riverwalk, residents in the eight census tracts that make up the East Chattanooga area — 18 percent of whom do not own a car — will have the option to walk or bike to jobs in the Amnicola Highway business park or downtown Chattanooga, to education opportunities at Chattanooga State, and to the many parks and trails along the riverfront.

“The replacement and improvement of the Wilcox Boulevard Bridge will shape the future of the East Chattanooga community, opening up new opportunities for jobs and access to our beloved Riverwalk for some of our city’s most historically disadvantaged neighborhoods,” said City Councilwoman Marvene Noel, in whose district the bridge resides. “East Chattanooga was home to one of the first incorporated African-American cities in the nation, and this tremendous investment will help ensure its spirit of independence and cultural vibrance continues to thrive with new growth and prosperity.”

The RAISE grant program is funded through President Biden’s Infrastructure Investment and Jobs Act, and Chattanooga’s award is one of the largest of the 166 funded projects announced by the U.S. Department of Transportation yesterday. The $25 million grant will go toward the estimated $54.5 million needed to fully replace the bridge, with the City and Norfolk Southern each contributing an additional $10 million and the Tennessee Department of Transportation contributing an additional $5 million over the next 2 to 3 years leading up to construction. Hamilton County is contributing $500,000, and the remainder will come from other local and federal transportation funding sources.

The construction plan is designed not to interrupt freight movements in the DeButts Railyard below the bridge, and will also continue to allow limited vehicular traffic on two lanes of the existing bridge.

The City of Chattanooga thanks the following elected officials, community partners, and stakeholders for their support: