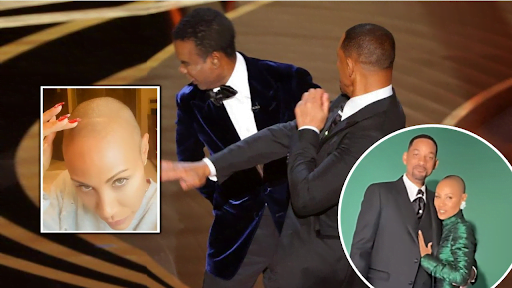 Jada Pinkett Smith and Will Smith have been in the spotlight a lot lately, and it’s not always been in a good way. The latest news involves Will storming the Oscars stage at the 2022 94th Oscar Awards and slapping Chris Rock making a joke about his wife. That moment is the one everyone is talking about from Sunday’s Oscars, and not the winners.

Rock made a comment about Jada’s bald head referencing the movie G.I. Jane, where actress Demi Moore shaved her head for the role.

It all went down when Rock came out to present an award for Best Documentary. On stage, the comedian laughed and said, “Jada, I love ya. G.I. Jane 2 — can’t wait to see it, all right?” At that point Will walked on stage and proceeded to slap Chris and then calmly walk back to his seat.

He then shouted back to Chris saying, “Keep my wife’s name out your mutha—— mouth!”

No matter how you feel about the joke, many did not know that Jada has had issues with losing her hair for years.

Back in 2018, Jada Pinkett Smith had been wearing headwraps and not showing her hair for months at a time. It turns out the beautiful Girl’s Trip star has been struggling with the hair loss condition, possibly linked to alopecia. She took to social media to explain it.

“I’ve been getting a lot of questions about why I’ve been wearing this turban,” said the beautiful 50-year-old actress.

“Well, I’ve been having issues with hair loss. And it was terrifying when it first started.”

She also says she’s currently receiving steroid injections to help with her loss.

“I’m getting steroid injections, which seem to be helping but not curing. But I’m open to other ideas,” she posted on her Instagram.

One type of steroid injection Pinkett Smith may be using is called Corticosteroid Injections. This method of treatment — the most common form of treatment for alopecia areata — uses corticosteroids that are injected into bare patches of skin with a tiny needle. These injections are repeated about every four to six weeks and are usually given by a dermatologist.

Alopecia is defined as loss of hair from the body. Hair loss is often a cause of great concern to the patient for cosmetic and psychological reasons, but it can also be an important sign of systemic disease.

Alopecia areata, also known as spot baldness, is a condition in which hair is lost from some or all areas of the body. Often it results in a few bald spots on the scalp, each about the size of a coin. Psychological stress may result. People are generally otherwise healthy. In some, all the hair on the scalp or all body hair is lost and loss can be permanent.

Alopecia areata is believed to be an autoimmune disease. Risk factors include a family history of the condition. The underlying mechanism involves failure by the body to recognize its own cells with subsequent immune-mediated destruction of the hair follicle.

The actress recalled the “terrifying” moment she first noticed she was losing “handfuls of hair” in the shower.

“It was one of those times in my life where I was literally shaking with fear,” she said. “That’s why I cut my hair and continued to cut it.”

This revelation was featured in the third episode of her Facebook mini-series, Red Table Talk, co-hosted by her mother Adrienne Canfield Norris, and teenage daughter Willow Smith.

Other topics discussed have included coping with loss, motherhood and body image – with Willow previously disclosing she self-harmed as a child following the release of her debut single Whip My Hair.

Despite having many medical tests, Pinkett Smith said she has not been able to find the cause of her alopecia. She suspects it might be stress.

Other main factors for alopecia are:

The thyroid is a butterfly-shaped gland at the front of the neck.

It produces hormones that regulate many processes throughout the body. If the gland makes too much or too little thyroid hormone, the hair growth cycle may falter. But hair loss is rarely the only sign of a thyroid problem.

Other symptoms include weight gain or loss, sensitivity to cold or heat, and changes in heart rate.

The body makes higher levels of androgens than expected. This often causes extra hair to sprout on the face and body, while hair on the scalp grows thinner. PCOS can also lead to ovulation problems, acne, and weight gain. But sometimes thinning hair is the only obvious sign.

These days, Pinkett Smith said she enjoys using turbans, as they help conceal her condition and are an empowering fashion choice.

“When my hair is wrapped, I feel like a queen,” she said. (Source:  BlackDoctor.org by Aria Ellise, BDO Special Contributor)