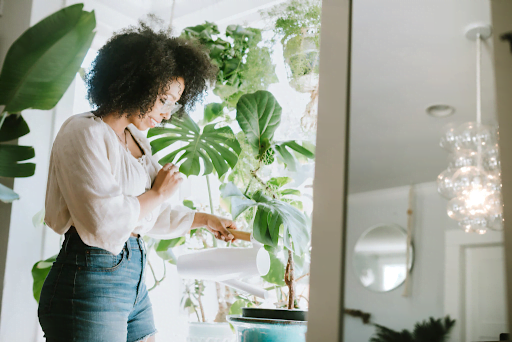 The more time we spend in the house, the more we need focus on keeping it clean, including the things we can’t see. Houseplants are our often-overlooked helpers in ridding the air of pollutants and toxins. But many are effective allies in keeping your household air clean and pure.

It is suggested that one plant should be allowed for approximately 10 square yards of floor space, assuming average ceiling heights of 8 to 9 feet. This means that you need two or three plants to contribute to good air quality in the average domestic living room of about 20 to 25 square yards.

Research has shown that these 10 plants are the most effective all-around in counteracting offgassed chemicals and contributing to balanced internal humidity.

Here are some of the best air-purifying houseplants and the toxins they are most effective at reducing:

2. Golden Pothos (Chrysanthemum morifolium)—This fast-growing vine is usually seen hanging in a cascade of green from baskets. You can pot it with a support, plant it in a hanging basket or train it to climb a trellis. It is quite an addition to your home, with its dark green leaves and golden streaks. The plant needs bright, indirect light and is great at fighting pollutants such as formaldehyde, usually found in car exhaust fumes. Heads up: Golden pothos is a poisonous plant and should be kept away from small children and pets. It’s not called the devil’s ivy for nothing.

5. Acre Palm (Dracaena massangeana)—One of the most common indoor plants, the areca palm doesn’t tolerate neglect too well. The soil needs to be kept moist for it to thrive. The plant, however, can survive on little sunlight. According to the NASA study, this plant filters out formaldehyde, xylene and toluene.

6. Peace lily (Spathiphyllum)—benzene, formaldehyde, TCE (Avoid lilies if you have cats – they can be toxic).