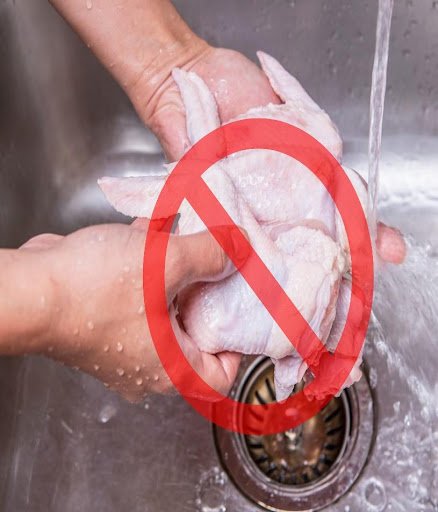 Food & Drug experts are warning people not to wash their chicken before they cook it. It sounds crazy, but here’s why…

Studies have shown that 44% of the population washes raw chicken prior to cooking. The percentage goes up to 71% when the chicken is frozen.

The Centers for Disease Control estimates that approximately one in every 1,000 reported Campylobacter illnesses leads to Guillain-Barré syndrome.

As many as 40% of Guillain-Barré syndrome cases in the U.S. may be triggered by campylobacteriosis.

A single drop of juice from raw poultry can have enough Campylobacter in it to infect a person!

Do NOT wash raw poultry prior to cooking.

Prevent cross contamination- Immediately wash any cutting boards/utensils that have come into contact with raw poultry before using them to prepare any other foods.

If you feel the need to wash your poultry:

Let’s face it, sometimes you MUST wash poultry, like the inside of turkeys before stuffing them, legs/thighs to remove bits of bone from butchering, etc. Here’s how to do so safely:

Let the chicken set a few moments to fully drain off

Wash the surrounding counter areas with hot soapy water (A solution of 1 tablespoon of unscented, liquid chlorine bleach in 1 gallon of water may be used to sanitize washed surfaces and utensils.)

Properly cooking poultry effectively kills any potential bacteria (Salmonella, Campylobacter, etc) that is on the chicken, but taking these simple steps will ensure that you don’t accidentally spread the bacteria prior to cooking. (Source: BlackDoctor.org byCharles Reed)