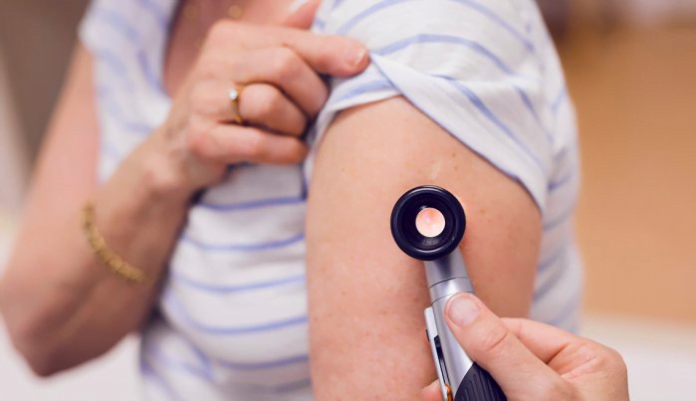 Nearly 100,000 Americans are diagnosed with melanoma each year, making it one of the most common types of cancer in the U.S., especially among older adults who have endured decades of sun exposure and whose immune systems aren’t as robust as they once were. And while melanoma can be deadly, it is highly curable if caught early.

Do you know what to look for? The hallmarks of melanoma are asymmetrical or rough-looking moles that are not defined by a border. A spot on the skin that continues to grow in size or change is another indication, and a once-monthly body scan is an easy way to keep tabs on any of these concerning characteristics. But there are also some more unusual signs that could signal the presence of the skin cancer.

“Melanoma is such a rule breaker,” says Elizabeth Buchbinder, M.D., an oncologist at the Dana-Farber Cancer Institute in Boston and an assistant professor at Harvard Medical School. Little moles can cause big trouble, and new spots can grow and spread quickly, she adds. “And so knowing what to look out for, it’s super important.”

Here are four warning signs of melanoma you need to know about so that no spot goes unnoticed.

People who have lots of moles are at increased risk for melanoma. That said, there’s no need to start counting your spots or panicking over every mark on your body. Instead, pay attention to the moles that stand out — those that are darker than the rest, have changed recently or are more oddly shaped. Buchbinder calls these “ugly ducklings.”

“If you have a bunch of dark moles, but you have 50 of them, they’re not all melanomas,” she says. “But if you have one mole that really looks different than the others, and it’s kind of that ugly duckling, that’s the one that you really want to get looked at and checked.”

With women, melanomas most commonly appear on the arms and legs. Men need to pay special attention to their head, neck, back and trunk. Still, those aren’t the only places this type of skin cancer can pop up.

The majority of melanomas are thought to be caused by ultraviolet (UV) light, but not all of them come from sun exposure. Melanoma can develop anywhere on the body, including “in places the sun doesn’t shine,” like the soles of the feet or the palms of the hand, says Elizabeth Quigley, M.D., a dermatologist and associate physician at Memorial Sloan Kettering Cancer Center in New York.

The cancer can also appear as a dark streak under a fingernail or toenail, which is what happened to musician Bob Marley, who initially mistook his melanoma for a bruise on the toe and eventually died from it. (A clue that you should see a doctor: a dark spot under the nail bed that doesn’t grow out with the nail over time, like a blood blister would, Buchbinder says.)

And while it’s rarer, melanoma can also develop on the eye, inside the mouth or on the scalp. Buchbinder has even seen patients experience changes in their hair color — “someone who had gray hair and developed a black streak” — because of a melanoma growing on the scalp. “So strange things can happen, but these aren’t common ones,” she adds.

That said, these “hidden” melanomas are more common in people with darker skin, points out Vishal Patel, M.D., assistant professor of dermatology at the George Washington School of Medicine & Health Sciences and director of the Cutaneous Oncology Program at the GW Cancer Center.

“So I tell Black and Indian and Asian patients that if you have nail changes, [any dark spots] on your palms and soles, as well as in the eye and mouth, these are ones that I worry about,” Patel adds. “Because while it is less common to have that, when it does happen, it is worse. So it’s important to know about that.”

Melanoma is more than 20 times more common in whites than in Blacks, according to the American Cancer Society. Hispanics are also less likely than whites to get the skin cancer. However, ﻿when melanoma develops in people of color, it’s often diagnosed at a later, more dangerous stage. A 2019 study from the Centers for Disease Control and Prevention (CDC) found that the five-year melanoma survival rate among non-Hispanic ﻿Black populations was 66.2 percent, compared with 90.1 percent for non-Hispanic white populations.

While melanomas are often depicted as dark-brown moles, they can actually present in a variety of colors. The cancer may have a blue tint to it, from deeper pigmentation, says Robert Brodell, M.D., a professor and chair of the Department of Dermatology at the University of Mississippi Medical Center. Or it can appear red, the result of an immune response. “The body is attacking it. It knows it’s abnormal and it’s trying to defend itself, and you get inflammation,” Brodell explains.

It’s also possible for a melanoma to “look like a rash,” says Quigley, and take on a pink hue. But when the spot doesn’t get better with creams and other treatments that normally nix a rash, “you need to check and make sure that that’s not a skin cancer,” she says.

Another sign of a melanoma can be lack of color. Some of these cancerous spots lose their pigmentation completely or partially, leaving a halo of white around a darker spot.

“And that’s something that gives us a little concern,” Buchbinder says. “Was the body recognizing something like a melanoma that was going wrong, and in its process of destroying the melanoma it destroyed some of the normal melanocytes [cells in the skin that produce pigment] in that area? It’s just one of those things that may kind of make you look a little closer at something.”

4. Spots on the skin that bleed or itch

If a mole on your body starts to itch or becomes more painful or tender, you need to get it checked out. The same goes if the surface of a mole changes. Maybe it starts to ooze or bleed or take on a scalier appearance and doesn’t heal on its own.

“We think that some of that irritation — the itching, the bleeding — is actually the body starting to recognize [the cancer] and starting to attack it a little, making it irritated. And so that’s why you’ll see some itching and bleeding and irritation near the actual mole,” Buchbinder says.

Wearing sun-protective clothing and UV-blocking sunglasses, and lathering up on sunscreen are some of the most effective ways to prevent melanoma. Another thing to keep in mind: People on certain blood pressure medications, including diuretics such as hydrochlorothiazide and calcium channel blockers such as nifedipine, for example, need to be extra cautious when spending time outside. “Many of those [blood pressure] medicines make us more sensitive to the sun and more likely to get a sunburn,” Quigley says, amplifying the risk of skin cancer.

Because not all skin cancers are caused by sun exposure, frequent skin checks are an important part of prevention, too. Catching a melanoma before it has time to grow in thickness and spread to other areas of the body greatly improves your chances of survival. (You can find tips on how to do a self-exam on the American Cancer Society’s website.) Keeping your immune system as strong as possible can also help prevent melanoma.

The bottom line: “People need to really be aware of their skin,” Quigley says. “And if there’s anything that seems abnormal, it’s not the time to wait — it needs to be evaluated. … Particularly with COVID, patients have been delaying their skin checkups and their skin evaluations, and we are seeing that that is detrimental.”

A 2021 survey from the American Academy of Dermatology found that only one-third of adults are concerned about skin cancer, despite it being the most common form of cancer in the U.S.

Other findings from the survey:

Robert Brodell, M.D., a professor and chair of the Department of Dermatology at the University of Mississippi Medical Center, says it’s important to know your risks for skin cancer. According to the CDC, the most common risk factors, include: