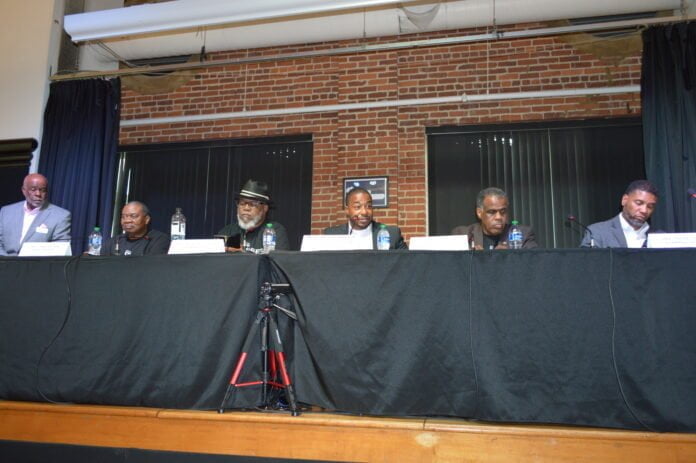 Concerned citizens gathered last Friday from 6-8 p.m. at the Bessie Smith Cultural Center to speak directly about their issues with members of the Tennessee Black Caucus of State Legislators (TBCSL).

The non-partisan group of Black lawmakers, chaired by Rep. Antonio Parkinson (D-Memphis), also shared information about their work in the state capitol on new laws and bills, and sought input from the nearly 75 people in attendance to help set their priorities for next year.

“We have not forgotten who we serve and represent, which is our constituents,” said Chattanooga Representative Yusuf Hakeem. “We must hear the voices of the people we serve and be held accountable to them.”

In wake of the widespread gun violence saturating the country–and in particular, the recent mass shootings in Chattanooga–Elijah Cameron, director of Community Relations at the Bessie Smith Cultural Center, kicked off the town hall meeting with a discussion on gun control laws and the 2nd Amendment.

“The only way I know how to stop a little boy from shooting someone with a gun is to know the little boy,” Hunter, who has been shot numerous times, said. “Cause if you don’t know him, you’re probably going to be the victim.”

Betty Maddox Battle is an advocate for the legislative funding of support groups for those who have lost loved ones through homicide, work she took up after her oldest son was killed in Atlanta in 1993.

“I stand before you today on behalf of all the grieving mothers all over this country, but primarily Black women,” she said. “I’m sick of it. We’re losing our children–primarily black, African American young men and women. It’s going to be a long hot summer, gentlemen.”

Maurquez Thompson, a rising senior at Brainerd High School, asked the legislators what can be done about a few “incompetent, failed Black elected officials.”

TBCSL kicked off its statewide tour in Knoxville on June 2. It continued to Chattanooga on June 3, then headed to Nashville June 6, before the last of four stops–scheduled in Memphis on June 16 as part of the Juneteenth Weekend.

There are plans to add more tour stops for July.
Each of the tour’s stops features a town hall meeting.

Camm Ashford
Camm Ashford is a graduate of the University of Tennessee-Knoxville, and a freelance writer based in Chattanooga, Tennessee. She is the author of "Scarry Stories: Tales from the Healed Side of Brokenness." Camm is a Featured Journalist at the Chronicle Media Group (Chattanooga, Tenn.) ChronicleMediaGroup.com.
RELATED ARTICLES
Community