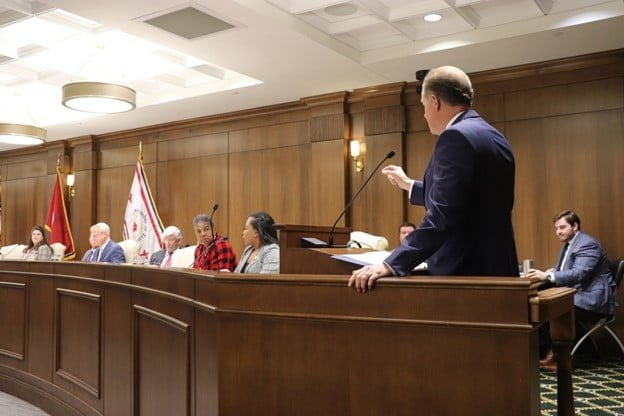 Republicans approved new election district maps Thursday, November 20. They say their maps will better represent voters in Tennessee regions with the most population growth. Democrats say it’s a purely partisan exercise to steal a congressional seat from Nashville, a community that has a majority of Democratic voters. “In a state where Democratic presidential candidates routinely get about 38% of the vote share, Democrats would continue to hold only 18% of the seats in the state Senate (6) – a feat accomplished by dividing communities and partisan gerrymandering,” said a Democratic Senate Caucus press release. The Senate Judiciary Committee held a hearing Tuesday, January 18. In 7-2 votes along party lines, the committee advanced Senator Jack Johnson’s (R-Franklin) three bills for new election maps for TN Senate, House, and the state’s nine U.S. House of Representatives seats in Washington. The Congressional map Republicans proposed would split the Black vote in Nashville into three different Congressional districts.

Senator Brenda Gilmore (D, 19 district)) knew she wasn’t going to get Republican support for the much fairer and more reasonably drawn Democratic Party maps. But she argued for them indirectly by asking Johnson questions about the Republican ones. “This plan dilutes the Black vote in Middle Tennessee.  In fact the district I represented for many years, Bordeaux, is partnered with 12 other counties and 11 of those counties are newly created districts that range in a White population from 85% to 95%. I don’t think in good conscience we can say this is not going to have a negative impact on the Black vote. Was there any consideration at all in keeping these Black communities whole without dividing them?” Gilmore asked.  “There is one opportunity for a minority majority district that is in the 9th Congressional District in Shelby County and that was certainly reserved in compliance with the Voting Rights Act,” answered Senator Jack Johnson, (R, Franklin) What Gilmore should have asked Johnson then was, “So, if you could comply with the VRA in Memphis, why couldn’t you do it in Davidson County?” But Gilmore is too smooth a politician—and too smart– to antagonize the Republicans who outnumbered Democrats on the Senate Judiciary Committee by 7 to 2. In the full Senate chambers on Thursday, Senator Jeff Yarbro (D- 20 District) tried to be reasonable. The Republican majority wasn’t the least interested in what he had to say. They tabled the Democratic plan and passed the Republican one in three votes along party lines, 26 to 5.

After comparing the Tennessee redistricting process to a round of baseball games where one side always wins, Senator Heidi Campbell (D, 21 District) gave an impassioned speech on the Senate floor. It, too, fell on deaf ears but is worth quoting at length. “We, all of us, are the team. And that the score we’re fighting for is to hang on to our Republic. This country that has given all of us the opportunity to participate in our government on behalf of our constituents, we are fighting for that. And this happens only when the body politic truly represents the people that it serves. And in this country and state that’s worked only because we agreed to the ground rules: citizen participation, equality, tolerance, accountability, free and fair elections, transparency, economic freedom, controls to limit the abuse of power, the Bill of Rights, accepting the results of an election, human rights, a multi-party system, accepting the rule of law. As political leaders and stewards of this precious gift, out forbearers passed down to us in the form of the first greatest democratic republic the world has ever known. We are as we speak, we are participating in that process. And when we accepted this role, we swore to uphold those principles, the principles that our ancestors fought wars to protect, and right now, on all of those metrics that I just mentioned, we have been classified as a back-sliding democracy. We are losing the very precious policies that fueled so many of the greatest inventions, innovations, ideas, and opportunities that humanity has ever known.