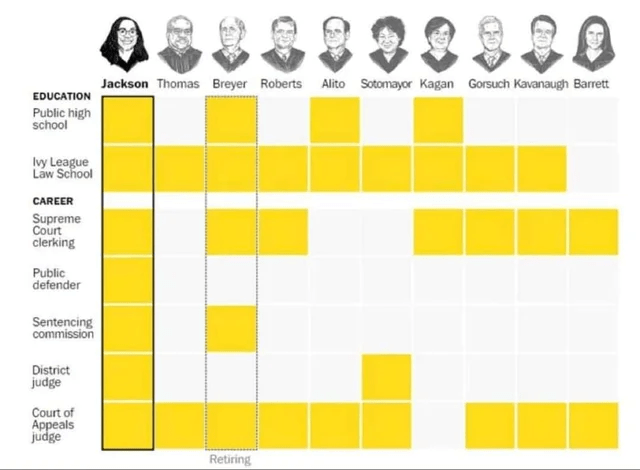 Well folks, darn, he’s back in the limelight. Ben Carson that is. Can’t say that we missed him. Last we heard was when he left his gig as a failure as Housing and Urban Director under the previous administration.

Now maybe I missed the memo but for the life of me I cannot recall any grandiose retirement parties on “doc’s” behalf at the White House – or while he threw down on caviar and grilled mushrooms at Mar-a-Lago – before he slipped off to who knows where. What I do recall were high fives, fist bumps, “good riddance” and other sighs of relief.

So, in case you missed it, Carson, who has a laughable history of putting his foot into his mouth, decided to express his “concerns” about President Biden’s pledge to choose a Black woman for the Supreme Court. As “doc” explained it, “we need a Supreme Court where we have the best candidates.”

Like millions, I tuned in to President Biden’s public nomination. However, my elation was soon dimed by how frequent the word – dog whistle really – “qualified” was tossed around in describing her.

But first, to put this into perspective, of the 115 justices who have served on the Supreme Court since 1789, 108 – 94 percent – have been white men and zero percent have been Black women. ZERO!

I repeat that, ZERO!

Next, study the following experience comparation of Jackson and current Supreme Court members from the Washington Post.

Back to Carson, the New York Times’ Charles Blow had a mouthful to say about his so-called “concern.”

“This from one of the most unqualified secretaries of housing and urban development the country has ever had; a man who didn’t even know the basics of his job. When asked at a congressional hearing if he knew what R.E.O (“Real Estate Owned”) means, Carson seemed to think she was referring to an Oreo cookie.”

Wrote Watson, “when President Biden announced his intention to nominate the first Black woman for the Supreme Court, some, such as Georgetown law professor Ilya Shapiro, even went as far as to claim his nominee would be seen as a “lesser Black woman.” I repeat, “a lesser Black woman.”  And that was just the beginning of the asinine poppycock that ensued.

Then came former U. N Ambassador Nikki Haley who tweeted, “Would be nice if President Biden chose a Supreme Court nominee who is best qualified without a race/sex litmus test.”

Now if you didn’t know better, you’d figure that Haley, who’s angling to become president, suffers from acute amnesia. How else should we interpret her silliness? What she conveniently overlooks is the fact that her former boss, a current resident of Mar-a-Lago, vowed to name a woman to the Supreme Court, and did.

“They did not ask to see the test scores of Trump’s three nominees, Neil Gorsuch, Brett Kavanaugh and Amy Coney Barrett,” wrote Watson.

“The unvarnished truth is that every person who is not White will confront the dim reality that no matter how accomplished their career has been, they will be labeled as incompetent and lacking in qualifications. Instead of achieving success through their own hard work and intelligence, they’re painted as the recipients of preferential and undeserved treatment.”

Continued Watson, “At one time, former president Trump levied the charge that President Obama was not intelligent enough to get into Columbia University and Harvard Law School and demanded to see Obama’s grades.”

“Interestingly, this is the same Trump whose attorneys threatened legal action if the University of Pennsylvania, Trump’s alma mater, dared to make his grades and test scores available to the public. I would argue that such hypocrisy speaks volumes.”

Okay readers, I will leave you with a two-part assignment – first, research the number of times the word “qualified” was bandied about during the three Supreme Court nominations by the previous president.

Second, investigate the SAT scores and college class rankings of members of the Senate Judiciary Committee who grilled her last week and compare theirs with hers. Then let’s resume this discussion of the word “qualified” once you’ve done your homework.

Meantime Mr. Carson, do us a big favor and disappear back into the shadows of who knows where.