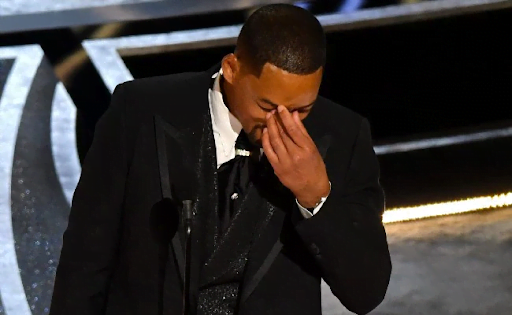 A week is behind me, yet I’m still seeing replays of Will Smith’s infamous “slap heard around the world.” That along with daily doses of “expert” opinions about the slap flooding the media, coffee shops, bars barber shops and kitchen tables.

Russia’s Vladimir Putin is indeed grateful that his newfound pal Will Smith jettisoned him from the headlines and replaced him atop on the world’s most despicable list.

But what a week it was – really, the past two weeks.

You see, no sooner than I tried to give myself a break from the latest in the January 6th congressional hearings, Ginnie Thomas, Ukraine, the pandemic and skyrocketing gas prices, came Smith’s idiotic slap. Now in case you missed it and were fortunate enough to have slept through it all, here’s a recap:

During the recent Academy Awards telecast, presenter Chris Rock made a crack about actress Jada Pinkett Smith, whose scalp is nearly bald. In response, Smith’s husband, Will, mounted the stage and slapped Rock in the face.  The furor over and responses to Smith’s slap were all over the map and continues as of this writing.

“What has developed since that unforgettable moment at the Oscars is a classic “two Americas” conversation. By that I mean Black people and white people aren’t necessarily talking about the incident in the same way,” opined The Atlantic’s Jemele Hill.

“What a revolting display of toxic masculinity by Smith,” said another person. “As bad as the assault on Chris Rock was, it wasn’t as disturbing as the immediate reaction to it. I mean he wasn’t escorted out of the place, booed, or shunned.”

“Say I’m an old-fashioned feminist (I am), but Will Smith’s slap on Chris Rock’s face was well-deserved,” wrote another. “You do not make fun of one’s personal illness or infirmity in a private setting and certainly not in front of a public audience of millions.”

Kareem Abdul Jabbar, NBA basketball superstar, published an excellent editorial about the incident. Wanda Sykes, co-host for the Oscars, said that she was traumatized by the event. Jim Carrey shamed “spineless” Hollywood for applauding Smith at the Oscars. Denzel Washington and Tyler Perry gave Smith a call, presumably – and hopefully – to deliver a well-deserved – “what the heck were you thinking bro”- tongue lashing.

Wrote Nobel Prize winning columnist Leonard Pitts, “Unfortunately, we men are good at hitting problems. It makes us feel manly. That’s why, from the Kremlin to Mar-a-Lago to the Academy Awards, there are few things more unpredictable — or dangerous — than a man who feels pressed to vindicate his manhood. The weaker the man, the greater the need and the vaster the collateral damage. Maybe next time Smith sees his wife in distress, his first thought will be to comfort her. That, after all, would be the manly thing to do.”

Suddenly remorseful, a sorry – true that word “sorry” – Will Smith resigned from the Academy of Motion Pictures Arts and Sciences. To that I say goodbye, good riddance, adios, sayonara, adieu.

Roxanne Gay, author of “Hunger,” and the forthcoming book, “How to be heard,” wrote a brilliant essay, not in defense of Will Smith but in defense of being “thin skinned.” Advises Gay, Jada Smith shouldn’t have to laugh off insults and nor should any of us. “I think a lot about how we are constantly asked to make our skins ever thicker. Toughen yourself, we’re told. Stop being so brittle. Lighten up.”

I read Gay’s piece again and again, each time extracting additional kernels for deeper contemplation. It must have occurred during the third read that I thought about how I, who stammered during my early years, developed thick skin in response to frequent mocks and jokes about my stammering. No one wants to be the butt of jokes, yet we’re expected to grin and bear it. And for years I did just that.

As Gay points out, millions are forced to wear thin skin when left undefended. Look no further than what Judge Ketanji Brown Jackson had to endure recently.

“During Judge Jackson’s confirmation hearings for the Supreme Court, that distinguished jurist endured all manners of insults, racism and misogyny from senators asking ludicrous questions.”

I mean at one point she was asked, seriously, “to define a woman,” that, for what it’s worth, was asked by another woman.

Now what I would define as “showboating” was by contrast an exhibition of “Jackassery,” as how one senator described what Judge Jackson was put through.

Her calm and composed expressions, punctuated with long, thoughtful pauses, contrasted with the pained looks on the faces of her family seated right behind her. Their constraint, particularly by her husband, was admirable, plus.

In the end, Jemele Hill put to rest my concern that Smith’s behavior, as it’s done historically, would smear Black folks in general.

“Last night’s Oscars were the first with an all-Black production team. But Smith’s overreaction does not reflect on anyone but him, and the suggestion that our community should feel any measure of collective shame is completely misguided. Nor should we feed into the dehumanizing stereotype that Smith’s conduct is typical for Black people.”

Thanks Jemele Hill…no thanks Will Smith.