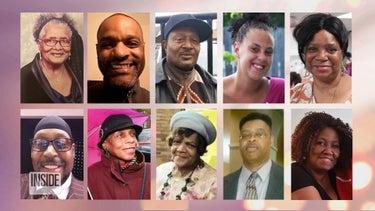 Okay, you don’t know me and until a week ago, I didn’t know you.

But since you disrupted my life when you snuffed out the lives of 10 African Americans in Buffalo, I decided to write you a letter. I include pictures of your victims because I want you to see them in your worst nightmares during your years behind bars.

Now the truth is that the awful thing you did was still unsettling even as we’ve become numb to mass shootings in the U. S. What you did to my people in Buffalo was no different from last year’s massacre of Asians in Atlanta, 2019’s massacre of Latinos in El Paso, 2015’s massacre of African Americans at a church in Charleston or the slaughter of people in that synagogue in Pittsburgh. Those who carried out those dreadful acts are probably the ones who inspired you to arm yourself and make the 200-mile drive to Buffalo to initiate the carnage.

From I’ve read about you gunman, apparently you suffered so much from boredom in your hometown of Conklin, New York that you read everything you could get your hands on about “Replacement Theory,” the cockamamie conspiracy theory that people of color and immigrants are out to “replace” white people in America. And somewhere you probably came across and was inspired by the “Jews won’t replace us” placards and chants by Alt-Right marchers in Charlottesville, Virginia in 2017. Am I right gunman?

Unfortunately, there are lots of people who share your twisted “replacement” belief but defer to losers like you to act on them while they cheer you on from the safety of their campaign rallies, TV studios, bars, pristine golf courses in Florida and “members only” country clubs. Yep, you’ve been played gunman. While you’ll be fed tasteless prison food, they’ll be chomping down on rare steaks and sipping fine wine.

You found time to write a 180+ page “manifesto” – an instruction manual for copycats I suppose – laced with hate (“N-word” this, “N-word” that, on and on and on).

Well, I have some news for you gunman. If you think that you were bored in Conklin, oh boy, you won’t know what real boredom is until you are locked up for the rest of your life for the murders you committed. The friends you thought you had will disappear – vamoose! – like Houdini out of the bottom of a wooden trunk.

Now I’ve never heard of Conklin. But thanks to you the image of that city has been irreparably tainted at a time when the city had the pandemic, inflation, skyrocketing gasoline prices and other more important things to worry about. I cannot imagine the level of pain you’ve caused your family and others who knew, or thought they knew you personally.

Look gunman, never in my wildest imagination have I worried about being shot in the checkout line at a grocery store, church, mall or concert by someone as hate filled as you. Never.

So because of you, do I now have to look over my shoulder with a wary eye at any “suspicious looking” young white male when I’m out? Do I need to stay clear of events that attract large numbers of African Americans, say churches, funerals, Historically Black Colleges and Universities athletic events, homecomings and graduations?

Does it make sense for me now to only attend the fragile safety of large gatherings where I’m the only one or just a few of those who look like me? Would it be wise for me to now don a bullet proof vest to protect myself whenever I leave home?

So tell me, are there any safe spaces in America where I and millions of other African Americans don’t have to concern ourselves with being taken out by your ilk because of our race?

I’ll end with an excerpt from a piece by Pulitzer Prize winning columnist Leonard Pitts in the aftermath of the 9/11 terrorist attack, a few years before you were born gunman. Strike out the words “World Trade Center” and “Pentagon” in the first paragraph and replace them with the word “Buffalo”:

“What lesson did you hope to teach us by your coward’s attack on our World Trade Center, our Pentagon, us? What was it you hoped we would learn? Whatever it was, please know that you failed.

Did you want us to respect your cause? You just damned your cause.

Did you want to make us fear? You just steeled our resolve.

Did you want to tear us apart? You just brought us together.

Yes, we’re in pain now. We are in mourning, and we are in shock. We’re still grappling with the unreality of the awful thing you did, still working to make ourselves understand. Still, I keep wondering what it was you hoped to teach us. It occurs to me that maybe you just wanted us to know the depths of your hatred. If that’s the case, consider the message received. And take this message in exchange: You don’t know my people.”

In closing gunman, you’ve got lots of time, years in prison hopefully, to comprehend the horrible decision you made, the triggers you pulled. I suggest that you not waste that time engulfed in baseless conspiracy theories or writing another nonconsequential “manifesto.” Instead, spend your time between scrubbing toilets and making license plates by doing other things more productive…. like immersing yourself in African American and other histories.