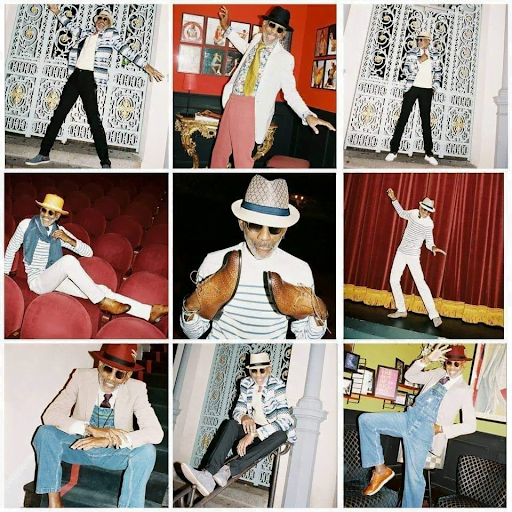 “I’m a living example of the truth of the old truism, ‘if there’s a will there’s a way!”

When I answered my phone last week, the voice on the other end had a familiar sound to it as did his laughter. Out of the blue I found myself on the line with Paris resident Larry Vickers, a fellow I grew up with, a guy whose talents I’d always admired.

You see, as a 20-year-old from a small, segregated town in Virginia, little did Larry Vickers know when he stepped off the bus into the glitz and glare that met him in New York City where his God given talents would take him. And neither those of us who proudly claimed him as one of our own, our native son.

So, after close to a half century of performing on stages across the globe, Vickers finds himself these days at peace and happily settled into his beloved Paris, the world’s epicenter of fine wines, culture and fashion.

Why Paris? Well, like his counterparts in other creative fields – among them James Baldwin, the great Jazz and Blues performers of their times and other figures of the Harlem Renaissance – stints in Paris provided validation, renewal and, for some, an escape from the stifling realities of racism in America.

“Coming from a small southern town where we were conditioned to saying, ‘yes sir’ and constantly being told ‘no,’ one of the first things I had to learn was how to say ‘yes.’ That lesson stuck with me when I think about the many opportunities that came my way throughout my career.”

Not long after taking his first step onto the New-York City scene, Vickers landed his first professional job as a dancer in a dinner show staring Hollywood star Alexis Smith.  “That was a huge confidence builder,” he said. Before long Vickers traveled to Paris and began his professional career at Bruno Coquatrix’s Olympia Music Hall.

He later returned to America where he was rapidly getting noticed and was given the featured dance role in the Broadway musical “Purlie,” choreographed by Louis Johnson and staring the Tony Award winners Cleavon Little and Melba Moore.

“The truth is that I did not just show up on stages and TV sets,” Vickers pointed out. “There were people of color who opened doors for me. One person even intimated that I reminded him so much of his younger self.” It was Lester Wilson, best known for his choreography for “Saturday Night Fever” starring John Travolta, who was instrumental in getting Larry the opportunity to dance on Don Cornelius’ “Soul Train.”

In 1970, he met Sylvie Vartan, the French pop singer, in New York who invited him to Paris to dance in her show “Sylvie Vartan at the Olympia.” While there he began doing television specials, commercials and movies. In one television special he met Line Renaud and became her choreographer for her international touring show.

When Vickers returned to New York to scout for talent for Renaud, he was selected to be one of the five dancers for the “Gypsies in my Soul” European tour with Shirley MacLaine. In 1975, he was invited by Lester Wilson to dance in the MGM movie “Funny Lady” staring Barbara Streisand and Omar Sharif.

As a dancer with increasing fame, Vickers appeared on TV specials with Cher and danced with Goldie Hawn and Liza Minnelli and on the Mary Tyler Moore Hour. He was a featured dancer in “The Wiz,” a movie starring Diana Ross and Michael Jackson.

Later he danced with Ann-Margret on her disco single, “Love Rush,” before returning to Paris to choreograph the comedy “Envoyez la musique” at the Porte Saint Martin Theater. He then choreographed a television movie, “Ca Vous Plait,” starring Jean-Pierre Cassel.

After staging Grace Jones for a gala in Monte Carlo, Vickers accepted the request from fashion designer Miquel Cruz to stage his fashion show featuring Jones in eight major cities and countries and then was engaged to perform for the Italian Oscars in Switzerland featuring Sophia Loren and Giorgio Armani.

He later relocated to Florida where he staged the first presentation of the Miss Universe pageant for the American Heart Association. While there he was the casting director for the film “Versace murder,” and staged and choreographed Eddie Murphy’s “Holy Man” with Jeff Goldblum and Priscilla Presley.

After his stay in Florida, Vickers returned to his hometown Staunton, Virginia, and transformed his former high school into a cultural center. There he co-produced the French American Gospel Music Workshop, hosted guests from France and celebrated the last show of the seven-year exchange at the Espace Pierre Cardin in Paris.

Today Larry continues to express his talents and influences between cinema, television, cabaret, videos and fashion. He is working on a musical tribute to legendary female Blues and Jazz singers and an original opera, “Seven,” the evolution of music and dance based on the Greek myth of Orphee and Eurydice.

And little did we know, although we always had a hunch.