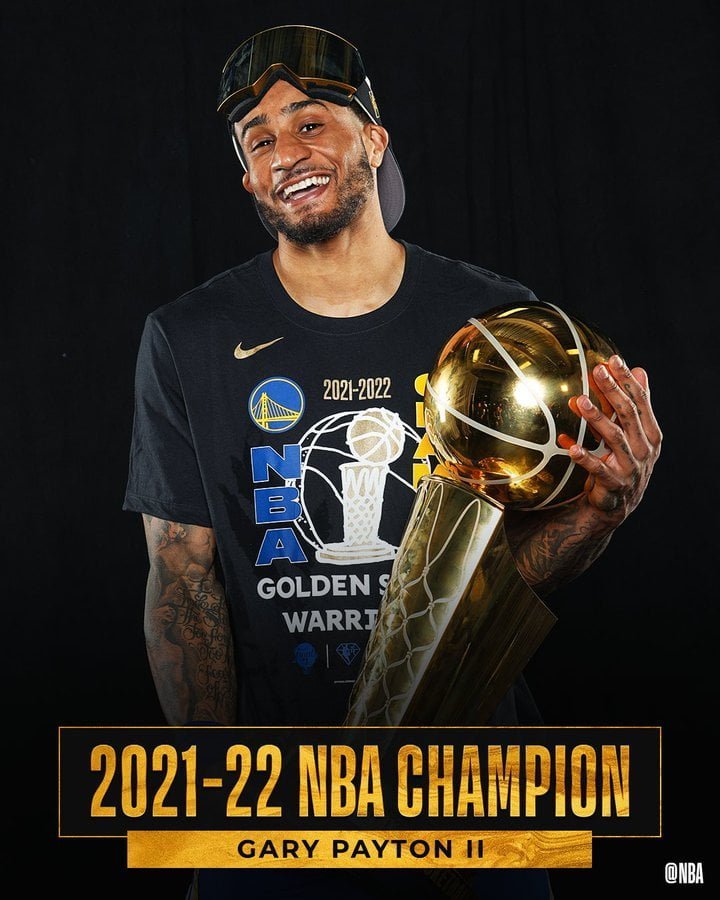 Psst, hey reader! If ever you needed an inspirational “The apple doesn’t fall far from the tree” story, then look no further. Monique Payton (the tree) and her son Gary (the apple) are textbook examples and are at the center of the inspirational story that follows.

“Journeymen” is vernacular for players who play for multiple teams over the course of their professional basketball careers. Often, many are signed, released, resigned, picked up on short-term contracts by other teams or end up on rosters in development leagues hoping one day to get one last shot with a team in the National Basketball Association.

Which brings us to the compelling story of Gary Payton II, crowned last week as a member of the world champion Golden State Warriors. And what a story.

Because of space limitations, I decided to share a synopsis of his story through the words of Payton’s grandfather, Ollan Christopher Bell, better known as Chris James, Douglasville, Georgia resident, co-founder of the 1970s hit-making group, The Natural Four and author of the book, “Music Saved my Life.”

With temperatures hovering near 90 degrees, we sat on James’ patio sipping wine the day after the Warriors victory, interrupted frequently by his rumbustious dog Antionette who vied for our undivided attention.

“Gary called and wished me a happy birthday the other day,” beamed Bell. “The last time I’d actually seen him was at a restaurant last year in California. And here we are, wow, a couple of days later and he’s a member of the world champion Golden State Warriors. Man, can you believe that?”

To begin the story about his grandson, I wanted to know what thoughts raced through Ollan’s mind before and during the championship game. He paused, shooed Antionette away, and leaned back in his chair.

“Honestly, being a musician and not a true sports fan, I thought that Boston would win and that the final game would be won by the Warriors in San Francisco. But I was not surprised by the outcome because Gary has always worked hard for everything he’s achieved. He inherited that from his mother Monique who was a great swimmer, basketball player and all-around athlete.

Now readers, we’ll need your imagination to “see” the story that follows.

Now envision an iceberg, the tip of which is above the water. In that space visualize the picture of the above trophy-holding Gary Payton, II. But the bigger stories are the ones below the surface, the ones you cannot see that had an impact on the young Payton you see in the top of the iceberg.

To begin, Payton was born in Seattle to Monique and Gary Payton while his father was a member of the NBA’s Seattle Supersonics. He played his college basketball at Oregon State University and was coached by Craig Robinson, the brother of former first lady Michelle Obama.

He was waived by Golden State before the start of the 2021–22 season but was re-signed after he cleared waivers. He had a breakout season and started the first two games of the Western Conference semifinals against the Memphis Grizzlies.

In Game 2, Gary fractured his left elbow when he went up for a layup but fell hard after the Grizzlies’ Dillon Brooks chased him down and hit him in the head while he was in the air. Incredibly, he recovered and in Game 5 of the finals he posted 15 points, five rebounds and three steals in a 104–94 win over the Boston Celtics.

Now let’s deep dive underneath the iceberg and learn something more that you may not know about Gary Payton II…. his struggle with dyslexia.

Briefly, dyslexia is a learning disorder that involves difficulty reading due to problems identifying speech sounds and learning how they relate to letters and words. Also called reading disability, dyslexia affects areas of the brain that process language. It’s important to know that people with dyslexia have normal intelligence.

Finishing up, I asked Ollan to tell me one other thing about his grandson that many may be surprised to know. With a smile on the face of a proud dad and granddad, he first told me that his daughter Monique started a foundation and a non-profit after her divorce from Gary’s dad.

He then gave me a link to the Gary Payton II (GPII) Foundation, a non-profit organization that acts as a conduit for dyslexia-awareness, supports early screening, detection, and certified assessment for youth and young adults with languages-based learning challenges.

Yes indeed, with Gary and Monique Payton, “the apple doesn’t fall far from the tree!”