Brenda Travis, what else don’t we know?  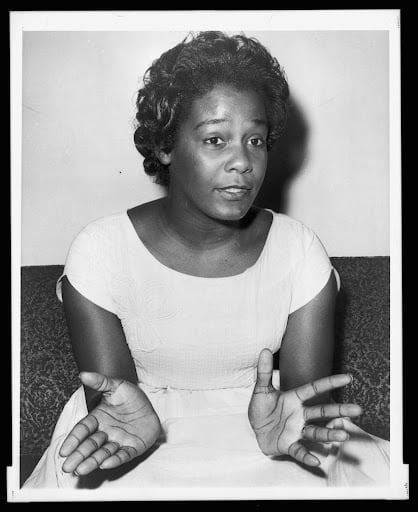 Wow, she’s Black, she’s beautiful, plus she’s….oh wait, do I know this lady?

Was she a former teacher, college classmate or, I hesitate to ask, a distant relative?

Those were the questions that darted through my mind when, during my research for something for African American History Month, I came across a picture of Brenda Travis.

But first, readers, a quick question.

Thinking back on your formal education, did the name “Brenda Travis” ever surface in one of your history classes? No, I’m not talking about someone by that name who sat two rows over, or from your old neighborhood, or a person you met during a trip to Disney World. Well neither did I and, I suspect, neither did many of you.

But thanks to the internet, with little effort we’re able to uncover lesser-known folks who sacrificed greatly in the struggle for civil rights, count Brenda Travis among them.

But let’s learn a little something about Brenda Travis, shall we?

“Brenda Travis knelt to pray at the top of the steps outside McComb City Hall. “Our father….” She began.

Deputies armed with Billy clubs, stood guard at the entrance. Dozens of Travis’ classmates from Burgland High crowded the sidewalk across the street, watching, waiting, holding signs. Some read, “Freedom Now.” Before Travis could recite the Lord’s Prayer, two deputies yanked the 16-year-old student up, lifting her out of her shoes. They led her barefoot down a narrow dark staircase and into a jail cell in the basement of the building.” As she was led away, she heard a voice command: “Arrest all of these ni—-s!”                         –   USA Today, October 7, 2021

Born in 1945, Brenda Travis was one of seven children. When she was ten, local police burst into her house one night and arrested her thirteen-year-old brother without telling the family what he had allegedly done.

As a ten-year-old, Travis was also scarred by the image on the cover of Jet Magazine of the mutilated body of Emmet Till, a Black 14-year-old who was murdered in 1955 in Mississippi.

“I was enraged and knew that one day I had to take a stand,” she said.

That day came in August 1961, when the fifteen-year-old Travis and two other protesters were arrested for participating in a sit-in at the whites-only section of Greyhound bus station. She was held in the jail for a month and upon release she and another classmate were expelled from Burglund High School.

On October 4, 1961, more than 100 Burglund students staged a protest against their classmates’ expulsion and the murder of Amite County voting rights activist Herbert Lee in September. Because of what took place at the bus station Travis, who was on probation, received a sentence in a juvenile detention center in Oakley.

In 1962, after more than six months at Oakley, Travis was released into the custody of a professor from Talladega College. Mississippi governor Ross Barnett agreed to release the girl on the condition that the professor take her out of Mississippi within twenty-four hours.

That fall, Travis enrolled into school in North Carolina and after a year there moved to Connecticut where she graduated from high school. She returned to Mississippi in 1964 but felt unsafe and soon left. She worked briefly in Chicago before settling in California in 1966 and attending business college and becoming involved in community organizations.

In October 2011, during a commemoration of the fiftieth anniversary of the student walkout, the McComb school district awarded honorary diplomas to Travis and other students suspended because of the protests. A local street was renamed in her honor.

Today, decades removed from her activism in Mississippi, Travis and others worry that their battles have lost ground. They cite the growing number of states adopting measures making it more difficult to vote.

“It’s very disturbing to see us go back and fight fights that have already been fought,” said Travis, now age 76.

Travis’ book, Mississippi’s Exiled Daughter: How my Civil Rights Baptism Under Fire Shaped my Life, was published in 2018.

Now of course there’s much more to Brenda Travis’ story than I’ve written in this space. However, I figured that I’d try to get as much as I could about lesser-known stories during African American History Month before the month runs out, before history books about these stories get banned from library shelves or, eh, before this columnist gets banned from newspaper stands.

“Wouldn’t it be just wonderful when Black history, Native American history, Jewish history and all of U.S. history is taught from one book, just U.S. History?” asked the late Maya Angelou.

Absolutely Maya Angelou. But until then, well, I have my doubts.

“Shame Is Broken ” – In the Huddle