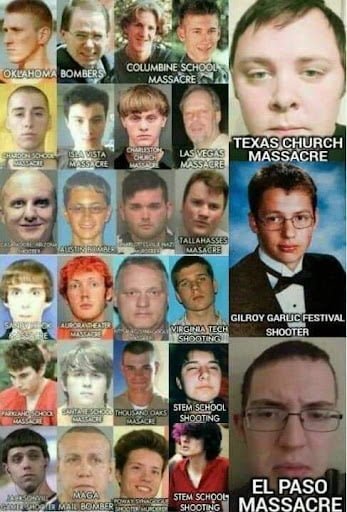 I can’t keep up with bad behaviors by men nowadays – not all men before you lapse into cardiac arrest in anger at me – but those dudes who can’t seem to deal with their demons, fears, mental illnesses, and hatreds in ways other than through the barrel of an AR-15.

So was it not men who flew planes into the World Trade Center, the field in Shanksville, Pennsylvania and the Pentagon on 9/11? Was it not the “Alt Right” men who marched in Charlottesville, Virginia in 2017 protesting the removal of the statue of Confederate general Robert E. Lee that led to at least one death and scores of injuries?

Was it men who murdered nine church parishioners in Charleston, South Carolina in 2015 and who gunned down six Asian women in Atlanta two years ago? Weren’t the gut-wrenching shootings at Texas’s Uvalde’s Robb Elementary School and at the July 4th parade near Chicago committed by men?  And more recently, was it not men who snuffed out the lives of six Muslims in Albuquerque, or a man who plunged a knife into the neck of author Salam Rushdie in New York?

Now of course you know the answers to these questions, but let’s step back to the title of this piece, part 2 of the one I wrote back in April – “Are men necessary?” Like that one this one will garner mixed reactions, likely along gender lines. Case in point is in response to the April one when a fellow seated near me at a cafe glanced at the headline from a distance and said, “I don’t think that an article like that is really necessary.” Said another fellow next to him, “I agree, it probably attacks men. Can’t you find something better to write about?”

Now those views from those two men piqued my curiosity enough to find out how some women would react to the article title, “Are Men Necessary?” So, I gave it a try.

“Oh my God, of course they are,” said one of 14 church group women seated at a table at a local restaurant when I showed them the article’s headline. “Why ask that question?”

Said woman #2 who looked up from her Cesar salad, “from my experience, there are both good and bad men out there and I’ve known both.” That drew agreeing nods from others at the table. The group erupted in laughter when woman #3 said, “heck, I’m twice divorced from two losers, available and in the market for a good man if someone can get me one.”

So how about we take a look at the preponderance of men – American men in particular – who are the shooters since the truth is that every time there’s a mass shooting in this country a distinct pattern and portrait emerges… the shooters are primarily men!

Wrote Pulitzer Prize winning columnist Leonard Pitts, “Curiously enough, no one ever seem to consider, much less interrogate, the neon thread woven through it all. Meaning that pronoun, “he.” Always, “he.” We take it for granted. It hardly even registers. But maybe it should.”

Now if there’s any doubt that mostly men are doing the shooting, well, there’s this: A government study of 172 mass shootings in the US since 1966 — defined as a shooting in a public place where four or more people were killed — found that just four of the shooters were female. That’s a little more than 2 percent.

All this brings into focus a renewed global interest in masculinity and the violent behaviors of men – again, some but not all men.

In his “A history of masculinity from patriarchy to gender justice,” by French author Ivan Jablonka and in British writer Nina Power’s “What do men want? Masculinity and its discontents,” both make the case for a more generous and humane feminist discourse capable of understanding the suffering of both men and women. They acknowledge that men have sensibilities too and, ahem, “even foxes have feelings.”

So, how on Earth do we explain this deadly male “shoot em up” thing that seems to have become a new normal?

Explains Dewey Cornell, Clinical Psychologist at the University of Virginia, “Men tend to be more violent than women because of a complex interaction of evolutionary and psycho-social factors. Men tend to be more aggressive and less inhibited by empathy.” Arguably, the answers run much deeper than that.

“So, while we debate mass shootings as a bigotry problem, a mental health problem, an access to guns problem — and make no mistake, we should — it seems past time we also began debating it as a men problem,” suggests Leonard Pitts. “That said, it is insufficient merely to indict men. Other countries have men — and for that matter, private gun ownership. Yet they don’t have the random gun violence this country does. Which suggests the question is not “What’s wrong with men?” but “What’s wrong with American men?”

I’ll depart by opening this keg of worms, one that warrants a deep dive of its own in a future expose’: the disparate treatment of captured shooters by race and ethnicity – those who are sent in body bags to a local morgue versus those who are escorted to a nearby fast-food joint for a burger, fries and diet coke.

And for Heaven’s sake, don’t shoot!

© Terry Howard is an award-winning writer and storyteller. He is also a contributing writer with the Chattanooga News Chronicle, The American Diversity Report, The Douglas County Sentinel, Blackmarket.com, co-founder of the “26 Tiny Paint Brushes” writers’ guild, recipient of the 2019 Dr. Martin Luther King, Jr. Leadership Award and 3rd place winner of the 2022 Georgia Press Award.