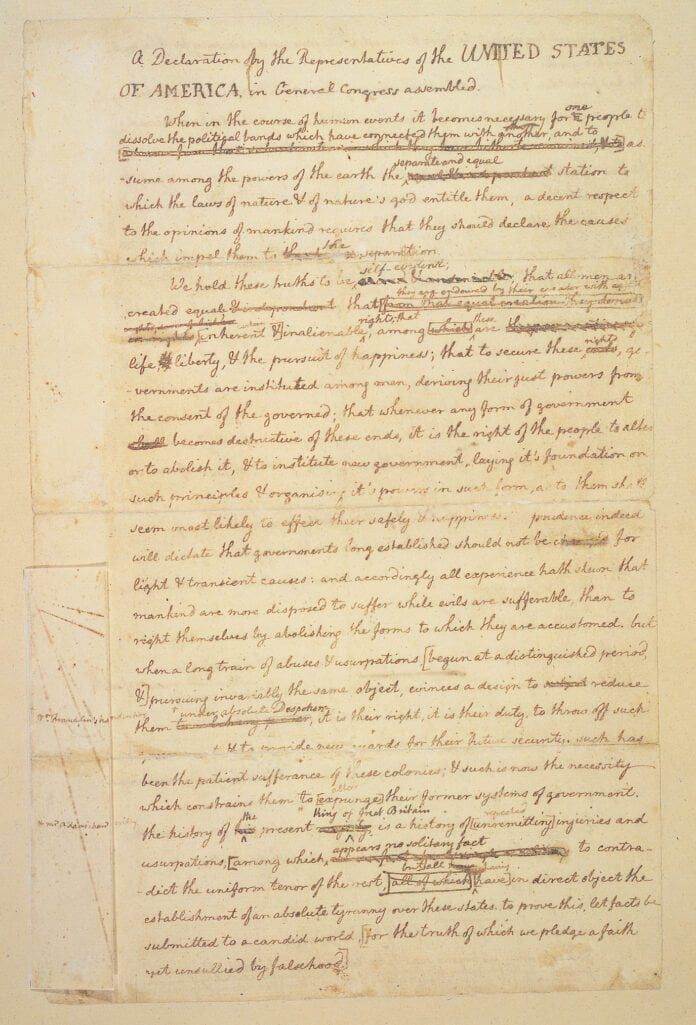 Monday, July 4 was the American holiday that serves as America’s birthday, filled with fireworks, barbeque, red-white-and-blue, time with family, friends and references to freedom.

Two hundred, forty-six years ago on America’s Independence Day, 56 men signed their names, and in effect, their own death warrant, to a document–the Declaration of Independence–announcing to the world that citizens of 13 colonies were uniting in the effort for independence.

Colonists were fed up with the oppressive government which had made a mockery out of their worship by forcing universal support of the Church of England through taxes and were taking hard-earned money from colonists to redistribute to others through whims of King George III.

The Declaration of Independence is still an amazing document to read. Drafted in June 1776 chiefly by Thomas Jefferson, a fiery writer whose powerful penmanship was the first, even before he was elected a Virginia delegate, to openly criticize the King of England, the original announcement was to first document that the actions against the Crown were necessary and then to justify, after failed attempts to be represented on issues and concerns in Britain, this independence.

Jefferson cited 18 acts of tyranny, or oppression through government, committed by King George for these two goals. Four colleagues–John Adams, representing Massachusetts; Benjamin Franklin, representing Pennsylvania; Robert Livingston, representing New York and Roger Sherman, representing Connecticut–joined Jefferson as the appointed Committee of Five charged with the duty of crafting language which supported the historic act of creating a new nation and announcing the formation of a republic, deriving its “just powers from the consent of the governed.”

Yet, the first draft of Thomas Jefferson was edited, not by this committee, but by the Second Continental Congress, comprised of delegates representing the original 13 colonies. Dissecting the document, knowing they would be targets of the British, these delegates first eliminated a section assigning blame of the establishment of the slave trade in the colonies to the King.

While the global culture accepted the sin of slavery as part of gaining wealth for a nation, the Jefferson-led Committee of Five had seen King George’s efforts, “suppressing every legislative attempt to prohibit or restrain this execrable commerce.” The original Declaration of Independence draft declared the Crown not only protected disgusting acts for the purpose of commerce and profit, but “waged cruel war against human nature itself, violating the most sacred rights of life and liberty.”

The temptation to assign blame for a grave practice which benefitted the economies of nations exists. But allowing this to inform for our best days as a nation will reveal our wisdom.

America is great because of her people…all of her people. But the expediencies for the purpose of popularity and profit predate King George, even ancient Bible times, and still live on.

Americans will be blessed to learn and abide by Saint Augustine’s admonition, “Right is right even if no one is doing it; wrong is wrong even if everyone is doing it.”